June 12, 2014
Himachal Pradesh is a state in India to the extreme northern part of the Asian subcontinent. The state occupies a region of exquisite scenic beauty in the western Himalayas, mirroring an iridescent textures of lofty snow clad mountains, lush thick forested valleys, gigantic lakes, terraced verdant fields, cascading crystal water streams etc. In fact there is no wonder that the region got its name apt to its nature’s beauty. The word “Himachal” means “snowy slopes” and the word “Pradesh” means “State”. Apart from its captivating natural beauty, the region is also popularly known for its hill stations. Let’s look at some of the top attractions of Himachal Pradesh.


DALHOUSIE
Dalhousie popularly grabs the attention of almost all the travellers around the world. This is one of the most beautiful hill stations in Himachal Pradesh that stands apart for its natural beauty. It is believed that the hill station is named after the 19th century governor General, Lord Dalhousie. A traveller who visits Dalhousie is also promised to gain a view of the great Dhauladhar Mountain, the alp which adds beauty to the nature and projects itself as an enchanter. The Dalhousie is also exceptionally beautiful and predominantly known for its revitalizing climate and appealing scenery. Some places of attraction in Dalhousie are Ajit Singh Memorial, Kalatop, Khajjiar, LakkadMandi, JandariGhat etc. 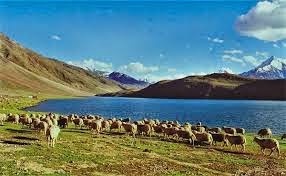 SHIMLA
Another hill station which marks a hub for Indian Tourism is Shimla. Apart from being a tourism place, Shimla is the capital city of Himachal Pradesh. Apart from its natural beauty, the city seizes the attention of tourists who love to have a look at the architectural building and who are shopping sprees. The place is a quintessence of calmness and Victorian Architecture. The locals of Shimla claim that the name of the place originates from Shyamali Devi, which is a re-incarnation of the formidable Goddess Kali. The place is predominantly popular among judicious shoppers and the place is aplenty with dress materials, antique pieces and woolen shawls.The Mall, Himalayan Bird Park, Chail, Fagu, Kufri, Viceregal Lodge, Himachal State Museum, the Gaiety Theatre, Sanjauli, Temples and Daranghati Sanctuary, are some of the major tourist attractions.

KULLU AND MANALI
Known as the twin valleys of Himachal Pradesh, Kullu and Manali stands apart for its serene beauty and nature’s charm. It is one of the adventure tour spots which is mostly visited by adventure lovers and aficionados. Splashing water streams and the slopes in the lofty mountains raises a pang of adventure in every individual’s heart. A person who values sanctity in heart must really visit Kullu, because there are countless temples here. Some places which should be in your visiting list are Raghunath Temple, Sultanpur Palace, Basheshwar Mahadev Temple etc.

Manali is a popular destination for the tourist which forms itself at the northern end of Kullu Valley. It represents itself duo in summer and winter. In summer it shapes itself as an adventurous place and in winter, a magical place with snow covered abode. Manali is believed to be a staging point for countless treks and white water rafting. Some places of attraction inManali are Hadimba Temple, Budhhist Monasteries, Rohtang Pass, Solang Valley etc.

DHARAMSHALA
The hill station filled with nature’s beauty, exquisite serenity and divinity surrounded with abundant Oak and Conifer trees. The snowline is more accessible at this place and just this scene is a bliss to the spectators. The hill station is also believed to be the land of Buddha and presently it is the shelter for Dalai Lama and may be because of its fame of Tibetan community, the place is actually a reflection of peace and positive energy to the tourists. Apart from its nearness to beauty, Dharamshala also holds the international cricket stadium on the maximum heights in the world. Some places of attractions are Dal Lake, Bhagsunag Falls, Jwalamukhi Temple, St. John's Church etc.

CHAMBA
Chamba is a beautiful town located in the valley of Himachal Pradesh, near River Ravi. The town is popularly known for its splendid architectural buildings, deep valleys and pine forest range. The town is covered with countless temples and the presence of the temples adds serene to the place.The city is also known for the famous Pahari Paintings. Some important places to be visited are Chamunda Devi Temple, Sui Mata Temple, Radha Krishna Temple, Harirai Temple, Sitaram Temple, Champavati Temple, Chaugan, Church of Scotland, Bhuri Singh Museum etc.

These are some of the attractive places in Himachal Pradesh. Once in a life time, be sure to hit this place. If you are a globetrotter, Himachal Pradesh should be in your travel list. Try exploring an adobe that pleases you and keeps you relaxed quite for a long time. Himachal Pradesh assures to be a replica of the Mother Nature’s Beauty.