As we all know Himachal Pradesh is one of the major and most popular or famous destinations around India. There are numbers of things those are proud to be a Himachali. The main attractions of the state is its natural beauty and Dhauladhar ranges in the in the northwest.

Today I am here to explain all the popular facts and one of the first things in Himachal. There are lots of things that held in first time. These all the things made Himachal one of the major sate and destinations all around India and it’s among states. As we know Himachal Pradesh came in to being as a part C state of Indian combination on 15th on April 1948. All the first in Himachal Pradesh is as bellow:- 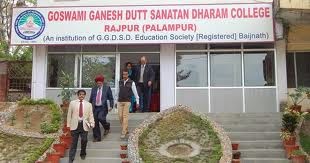 GGDSD Collage Rajpur GGDSD Collage Rajpur is one of the leading and most popular collages not in Kanga District but around Himachal Pradesh.  GGDSD refers to Goswami Ganesh Dutt Santan Dharma Education located in Himachal Pradesh Kangra district small town Rajpur Palampur . Now this time this collage offers plenty of professional courses including BCS (B.Com Corporate Studies), BBA (Bachelor of Business Administration), BCA Bachelor of Computer Application) and many other. In the current time this institution gaining more reputation around Himachal Pradesh. Dr. Vivek Kumar Sharma is a principal of this extreme organisation and always ready to help the students. This collage is well known for its highly qualified faculty and proving the best qualitative education to the students. Moreover students coming from this collage form long distance including Kangra, Nagorata, Dharmsala, Mandi, Baijnath, Hamirpur and Sujanpur etc. This collage is setup by Pt. Amar Nath Ji in the year 19
Read more