Holi is one of the famous and most popular festivals of Himachal Pradesh India. Are you ready to celebrate this Holi with your loved one? As you know it is come few days around the corner.  The festival is also called the colors festivals. Holi is celebrated with more grace by all the Himachali in the month of Phalgun as per dasi month and in the month March as per the Gregorian calendar. This year 2013 Holi is celebrating in the Month of March 27 on Wednesday. Holi is the festival of colours. 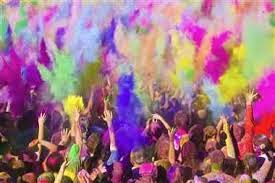 This festival celebrated with the various names like Dulandi Holi, Rangpanchami, Basant Utsav ect. and peoples of different sates according to their traditions. All the people are preparing themselves in advance to make enjoy in this wonderful day that is Holi. This is festival of joy for kids they uses different types of colors and Pichkaries to lure each other. The festival is also play a very important role to meet each other because this everyone playing with each others with colour such as Gullal and much other type of colors.
There is lots of Himachal festival but this is one of the more popular and unique from them. This festival is mainly celebrated by all the Hindus that why popularly known as Hindu festival. Holika Dahan is one of the main and major activities done by one the eve of Holi. In the second day people throw colors and water of different mixed colors to each other. Holi is celebrated all around the Himachal but this is famous is famous in Palampur in Kangra District and Sujanpur in the Hamripur District. On the day of Holi both these places fairs is organized by the committee of the City. Every year numbers of Punjabi stars comes from different places and given their performance.
On this day almost all the offices and shops are remain close. Some peoples are also drink this day to enjoy the festivals.
When is Holi Celebrated 2013, 2014 and 2015?
Holi is celebrating each year in the different dates in Himachal Pradesh India. This famous festival is celebrated the day after the full moon in March each year. In this year (2013) Holi is celebrated on Wednesday, March 27.
Holi is celebrated in 2013 on Wednesday March 27.
In the year 2014 celebrated in Monday, March 17.
In the year 2015 this is celebrated in the Month of March 6.