Kangra is a one of the famous district of Himachal Pradesh. The place is famous for its natural beauty and green gardens. Kangra valley is also famous for its temples. There are number of famous temples  (Religion Places in Himachal Pradesh) in the Kangra including Shiv Temple Bajnath, Jwalamukhi temple, Bhagsunath temple, Radha Krishna mandir, Bundlamata temple, Suraj Kund temple, Chamunda mata mandir and Brajeshwari Devi temple Kangra. Many people coming from different destinations or places to there. The pace is also known as land of goddess. The people of Kangra accept more on Devi Devtas like a blind man and thinks those are god for people’s growth.

These are as below:

About Baijnath:
Baijnath is located in Kangra District hardily 16 to 17 Km from Palampur. The village of Baijnath is situated 23-miles east of Nagarkot, as the crow flies, close to the Mandi border and on the main road, which leads from the Punjab plains through Kangra, Kullu, Lahul, and Ladakh to Central Asia. The Baijnath temple is orientated due west. It consists of a puri or adytum, 8-feet-square inside and 18-feet outside, surmounted by a spire of the usual conical shape, and of a mandapa or front hall, 20-feet-square inside, covered with a low pyramid shaped roof. The temple of Baijnath, although situated at no great distance from the centre of the earthquake of the 4th April 1905, but suffered slight injury from that catastrophe. The neighbouring smaller temple of Sidhnath, on the contrary, completely collapsed. Every year during Shivratri Fair, pilgrims descend on Baijnath for the colourful fair and festivities. 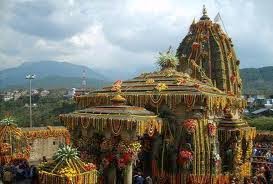 The Shivratri fair held near this remarkable monument, with the majestic backdrop of the snow covered Dhauladhar range, draws several thousand pilgrims every year. Baijnath is 16 km from Palampur and 132 km from Pathankot and also connected by narrow gauge rail line.

By the roadside on the Mandi-Palampur road, within a vast enclosure is the Baijnath Temple. Known as Kirangama, its name was changed after the temple was dedicated to Lord Shiva in his form as vaidyanath or the lord of Physicians. The temple is a good example of the Nagari style of architecture. The walls have the characteristic niches and the Shikhara has an amalaka and enshrine images of goddess Chamunda, Surya the Sun God, Kartikeya, son of Lord Shiva. A life sized stone Nandi, believed to be the carrier of Lord Shiva stands at the entrance. Also are other miniature shrines and memorial stones within the complex said to have been built around 804 A.D. The Lingam enshrined in its sanctum is one of the 12 Jyotirlingas in the country. Every year during the Shivratri Fair, pilgrims descend on Baijnath for the colorful fair and festivals.

HOW TO GET THERE:


Road: Baijnath is only 16-km from Palampur and 132-km from Pathankot, is a motarbus terminus on the Palampur- Kullu road, and is easily accessible from Kangra and Kullu

Many Other Religion Places in Himachal Pradesh:-

Mata Ashapuri HimachalPradesh – One of the Famous Temple around Palampur